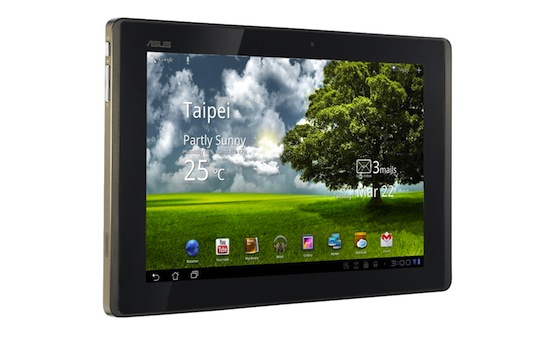 I’ve bought this tablet for more than two months but I just got a chance to review it, for some reason I don’t review gadget as fast as I used to. :p

But yeah, as tablets are getting more ubiquitous around us, I hope this review can help you to decide if Asus Transformer is the right tablet for you.

Asus Transformer is a 10″ inch tablet, just like iPad and Samsung Galaxy Tab 10″. Although when compared to iPad, the Android tablets are usually wider but shorter, and from one source I read before, a wider screen is cheaper to make than a tall one. Just notice, why more LCD monitors are wider, and not necessarily taller.

The display resolution is 1280×800 and it looks pretty sharp, not magnificent though.

As a sound afficionado, I’m not satisfied with the sound quality of the TF101, and don’t make me start to remember how the tablet speaker sounds. There is no equalizer setting, so the sound is as good as it can be.

The power of mobile device lies on its applications, and the Android market apps are.. well.. let’s say it’s just ok. Yes, there are a lot of apps, but not only the number of Android apps are well behind the iOS apps, the apps for Android tablets are even fewer.

And what I notice is that Android apps are not as ‘good’ as their iOS counterparts. I know this is subjective, but hey it’s my review right? 😀

I had a chance of playing around with Samsung Galaxy Tab 10, and specification wise, it has almost equal specification with the Asus Transformer, so theoritically there shouldn’t be a lot difference. Indeed, there aren’t so much difference.

But, if you compared to iPad, then you will understand why it will take a long way for Android OS to match iOS in terms of performance.

Before I say anything about whether you should get this tablet or not, let me tell you the reason why I get one.

I’m a software developer and I like to develop apps for mobile device, so the tablet is really a great option for me.

If you’re looking for tablet, and you don’t care if it’s Android or iOS, then I don’t really recommend the tablet because although it’s cheap, you still get more satisfaction with iPad.