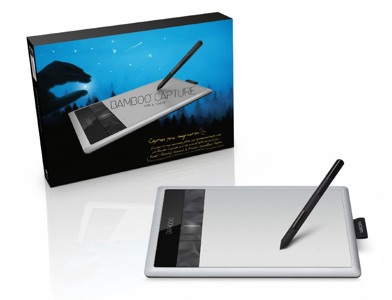 I’m going to be honest with you, a Wacom tablet is one of my dream gadget of all time. Eversince I was in college, I always wanted to buy one. It wasn’t so cheap back then, and I wasn’t an art student so I couldn’t really justify the need to my parents.

Surely enough, it’s not the professional-grade Intuos series, I still can’t justify that one even until now. The one I bought is the middle model of the Wacom Bamboo tablets series, called Bamboo Create.

I’ve played around with the tablet for a few weeks, and I think it’s time to write a review.

Ok, now I already have a Wacom tablet, now what? (Notice that I always refer it as Wacom tablet, so as not to confuse with the mobile tablet such as iPad, or Android tablets)

For artists, a Wacom tablet definitely helps them a lot in their work, whether it’s to do digital draw or painting. But for the rest of us, what actually can we do with this Wacom Bamboo tablet?

How about these: use it as a mouse pad, annotate PDF files, edit photo, and draw / doodle / sketch.

For me, the reason I bought the Wacom tablet is because I’m going to create a video tutorial with Khan Academy style. 🙂 (I kinda give up the digital artist dream I used to have when I was in college..)

Remember this fact, the Wacom tablet is only as good as it’s software. So be mindful of this as you choose the model you want.

Why? Because you want to check the bundled software that comes with it.

One of the reason why I chose to get the Bamboo Capture instead of Bamboo Connect is because the extra Adobe Photoshop Elements bundled in the earlier (~$70 separately). Add to that the multi-touch input capabilities of the tablet, it makes the extra ~$20 of the price justifiable. In fact, it’s actually a lot better deal.

Unless, of course, if you already have the software you needed.

So the Wacom Bamboo Capture tablet comes with the following software:

— not the latest version, it’s even two earlier version actually (currently is at version 10), but still do the job.

— nice extra plugin for Photoshop Elements, though it’s the very minimum version (you can upgrade for full version), not too bad though.

— this is a free software at App Store, doesn’t really count as extra value, still a nice software though.

All Wacom Bamboo model also comes with some Bamboo apps (they really look like mobile apps) that you can play with to kill time, but seriously, you want to do more than this with your tablet.

The Wacom Bamboo Capture price is around $90. The cheaper Bamboo Connect is $70, and the more expensive Bamboo Create is $165.

Before anything else, I need to mention that the wide space of the tablet is misleading. Not all the area is actually usable. The actual so called ‘Active Area’ is 5.8″ x 3.6″ area in the middle of the tablet, marked with almost invisible line marks (undistinguishable on the product picture).

Having said all of the above, I think the Wacom tablet Bamboo Capture model is really a not-so-cheap gadget.

This is my first tablet, so I can’t really compare it to anything else, but it’s been fun to use (although it takes a bit of time to get used to using the stylus), and serves it’s purpose very well.

However, if you plan to buy a Wacom tablet, and you’re not sure which one to choose from the Bamboo series, I believe Capture will be the best option among the three.

That’s all for this review, and check out some of my video tutorials when they’re out in the future! 🙂