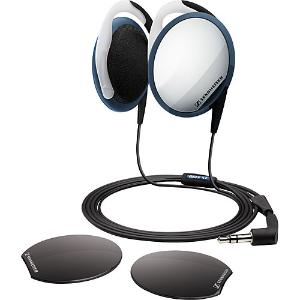 Wow, I’m very lucky to have the chance to review several earphones and headphones this week!

This time I borrowed my other work colleague’s Sennheiser OMX 52 headphones, one of the headphone from street style series of Sennheiser.

It’s a cool looking headphone with a oval shape and shiny metallic skin. But does it sound as good as it looks? Here’s the review.

Bring me the bass sound!
OMX 52 is a hybrid of earphone and headphone, so considering the driver size I expect it to kick some bass.

Unfortunately it seems that Sennheiser misengineered the earphone form factor, causing the bass to be, well, almost unheard.

It’s a supra aural type, meaning it sits on the ear, not enclosing the ear.

I tried to press the drivers to my ears and finally I could heard something I wish to hear earlier. When pressed close to ears the bass sound is good enough, but still lacking.

Mid and treble is fine, nothing special though.

Forget the detail, it also suffer from the misengineered form factor.

Ok, the OMX 520 is a street style edition, so it’s supposed to be wear in the street. I tried to head bang while wearing this headphone and they stayed on my ear, though I think they still slightly moved.

But I don’t think normal use of this headphone include head bang in the street, so yeah, it is quite allright.

However, I think it won’t survive longer period of shake such as when jogging and running.

Yet I find no issue with wearing the headphones for a long period indoor, it is comfortable enough.

It is tagged with a price of around $28 in Indonesia.

For the sound, I don’t recommend this Sennheiser OMX 52 simply because I’m not satisfied with it. It supposed to deliver a better sound if only it has better position and more pressed to the ear. Actually the form factor waste so much of its true capability.

If you are looking for a more portable headphones than Sennheiser PX 100, this still could be your choice though.