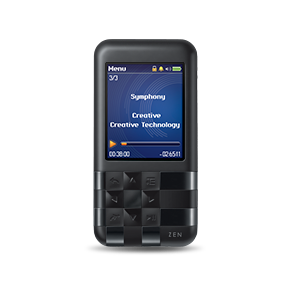 Another small music player I review this week after Meizu M3. My work colleague just bought it last week and he kindly let me borrow it and let me test it. It is the first Creative portable music player I tried so far.

I’m not sure if it is to be a rival of iPod Nano cause they have similar physical form, though Zen Mozaic is a bit shorter yet thicker.

Another thing that disappoint me is when I cannot tried my playlist of songs in FLAC and WAV formats I always use to review music player and earphone or headphone.

With 1.8″ screen, I think it’s big enough to show all the informations needed. It’s definitely better size than the Meizu M3 that only has 1.5″ screen.

Probably this player has a lot of plusses when it comes to extra features.

First, it’s able to play video files (although you need to convert it to its format first (.cmv))

Third, it has microphone so you can record important conversations as a solid evidence (like when your boss said he will double your salary).

In Indonesia it’s tagged at $67. A bit expensive I should say.

I don’t wanna sound mean, but I’m not impressed with this Creative Zen Mozaic 4 GB. Having listened to Meizu M3 earlier this week probably skewed my judgment this time, makes me expect something more from Zen Mozaic to impress me.

If you are looking for a small music player with a video playing capability, probably this is a good player for you.

However, if you are a sound afficionado and can be only satisfied with nothing less than a high definition sounds, then this player is not for you.