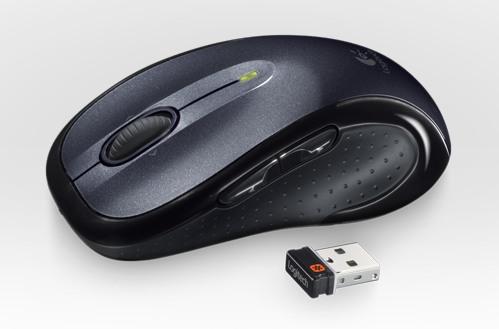 When we talk about mouse, one of the most popular name that immediately comes to mind is Logitech. Initially I was thinking of buying Logitech V220 because I was really not looking for special mouse, I just need one for my laptop. However, last Black Friday 2010, Staples offered the mouse for only $15, only $3 more to the V220. There were also sale for Microsoft mice, but I like the Logitech M510 because it is a full size mouse.

I’ve now use the mouse for more than 3 months and here’s what I have to say about it.

Definitely the first thing I need to talk about when I review a mouse.

Logitech M510 uses laser as it’s sensor. Laser sensor is different from the optical sensor that most mouse nowadays have.

Second, it has greater precision that most optical mouse has, or that’s the theory at least. In practice the difference is unnoticed in 1280×800 resolution of my laptop.

The Logitech M510 works fine in some surface like my bedsheet, laptop case, and the world’s cheapest optical mousepad. But not in other surface that even the simple optical mouse can perform.

The mouse connects through Logitech’s own Unifying Receiver technology that can connect up to 6 devices.

M510 uses two AA battery that Logitech claim can last for 2 years. The drawback is it adds to the weight of the mouse. If you prefer a bit heavy (read: stable) mouse like me, you will like this mouse, but not if you prefer something lighter.

The mouse has a lot of clickable buttons. Other than the two default left and right button, there are two buttons, called back and forward buttons, located on the side. These two buttons are positioned on the left side for the thumb (if you’re right-handed). The scroll button is not only clickable, you can also click it to the left and right. So in total, it seems that there are 7 buttons.

There is a software downloadable from Logitech website that can custom program these buttons. The back and forward click is auto-detected and it doesn’t require the software to be installed.

Although I was looking for mouse for my MacBook Pro, I wanted a full size mouse, not a small portable one. Logitech M510 is actually designed for desktop, so it is a perfect choice. Its contour also fits my hand perfectly.

The contour is symmetrically shaped so both right-handed and left-handed person can use it without any trouble, although the shortcut buttons are positioned on the left side, so yeah, it’s still a bias mouse.

The mouse is good, though not the best one I ever tried. I expected a lot from the laser tracking sensor but it sort of disappointing. I love the mouse shape and size, it is what I’m looking for. I also like the shortcut buttons, they are really convenient.

So, for the price I paid, I believe I got a good deal. 😀 But if it’s for a full price, I rather get an optical mouse.