(*this blog post was written in paper on December 2010)

Happy holidays for all of you and I hope you are having good time with your family at this time of the year, just as me and my family are having good vacation in California and Arizona this December.

I’m staying in Verde Valley now, in my father’s good friend’s house. Yesterday as we talked about a lot of things I found out that his wife used to play classical guitar when they were in Singapore.

As a great of acoustic guitar, I asked him if she still plays guitar now. He said she doesn’t but he can show me the guitar. So he took out a guitar case from their cabinet and I saw a beautiful classical guitar that is still in its prime condition, it’s a Yamaha Grand Concert GC-20A.

The manufacture year shows that it was made in 1985, so the guitar is as old as myself. It was made in Taiwan.

I’m not really sure of how to review a guitar, but I’ll give it a try here.

It’s a musical instrument, so I believe it’s very appropriate if, before anything else, I tell about the sound it produces.

Well, the guitar sounds true to its name, “Grand Concert”. The solid spruce top it has must be one of the contributing factors, and though I’m not really sure about this, I suspect the back and the sides are solids too.

It has a very clear and strong tone, something I expected from a guitar that is this fine.

It’s not enough that a guitar sounds really good, it’s also should be easy to play. So for the next part, I’m reviewing what I found when I played this guitar.

Very much similar to my previous two classical guitars, the Yamaha GC-20A doesn’t have any dotted fret signs. I saw a white coarse circle dot on the fifth fret that is most probably from a correction fluid (or tip-ex in Indonesian).

For me, the guitar has a perfect action, not too high, and not too low.

Looking at the guitar I can say that it’s never get played often even when it was newly bought. Considering that it is still in good shape and performance even after 25 years, it’s really a guitar with a good quality.

Now, this part is a bit subjective. The guitar doesn’t have any fancy looking decorations on the the body, sound hole rosette, and neck. It’s more like a plain classical guitar. However, the bright yellow color of the solid spruce top is fresh enough, and for me, looks modern compared to darker color of rosewood. 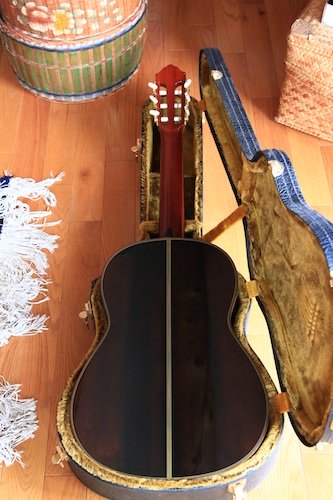 The guitar was probably the oldest guitar I ever played so far. It really stands to its ‘Grand Concert’ label in terms of sound and durability. When I check to the Yamaha website, the GC-20A is not produced anymore. It seems to have been replaced by GC-21 and GC-21C.

Can’t really compare it to other guitar of the same class because it is the most expensive guitar I tried so far. 😀